Apparently North Americans and Europeans are quick to peek but slower to share than their counterparts in the East:

U.S. Lags in Social Media Creation, per Survey
Consumers in the U.S. and Western Europe are more likely to be passive participants, while those in emerging markets often create content
April 18, 2008
-By Brian Morrissey 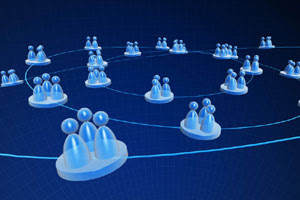 UM survey finds that domestic consumers 'love to watch.'NEW YORK A new global study of social media use reveals that the U.S. severely lags behind Asian and South American countries in participation rates. Consumers in the U.S. and Western Europe are more likely to be passive social-media participants -- sharing videos and reading blogs -- while those in emerging markets often create content through blogging, social networks and video and photo sharing sites."By and large, in the U.S. we're a country of voyeurs," said David Cohen, U.S. director of digital communications at Universal McCann, which conducted the study. "We love to watch and consume content created by others, but there's a fairly small group that are doing that creation -- unlike China, which is a country of creators."
Posted by @Digital_Daisy at 10:42 AM