When You Love Your Tims.. 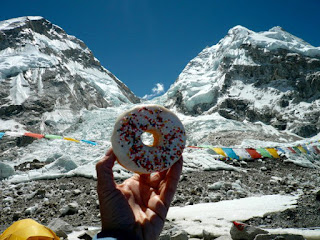 ...and your Tims loves you back!

This is the story of Tims, TA and Velma the Vanilla Dip.

When Everest climber and Tims fanatic TA Loeffler decided to take her ownership of the Tim Horton's brand to new heights, Tims was there to support. To TA a Vanilla Dip doughnut (eaten in moderation) is akin to a "religious experience". In fact, it came to her as no surprise when she noticed one day that budhist prayer flags such as the ones that provide protection to climbers on Mount Everest are indeed in the colours of the sprinkles that decorate her beloved Vanilla Dip.

Being so close to her Tims brand, made Tim Hortons an obvious choice when she was seeking sponsorship for her attempt on Everest. In her own words, the fund-raising effort for an expedition of this proportion, tops the challenge of the actual climb.

Tim Hortons, like all other big brands, is no doubt inundated with requests of this kind and their subsequent $10 gift certificate was probably quite generous, all considered.

It is not until TA's second attempt to summit Mount Everest two years later and another sponsorship request that the story started to unfold in the most interesting way. 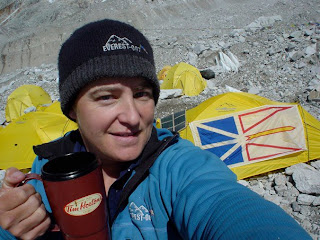 It is important to mention that TA summited Mount Elbrus in Russia in the mean time and an important lesson was learnt here. The Vanilla Dip doughnut (Velma I) that went along as expedition mascot did not do too well at altitude and emerged a shadow of its former self.

Not keen to repeat this mascot disaster, TA approached Tims again. If monetary sponsorship was not on the cards, what about a preserved version of Velma for the 2009 attempt on Everest? This is when Tim Hortons came to the table: with a specially preserved vanilla dip doughnut that was to be collected last minutes at a Tim Hortons coffee shop en route to Nepal.

The love between TA and Tims continues - wonderful photographs of Velma's adventures have been posted to the Tim Hortons Facebook Page. This page is seen as the most successful Facebook brand story in Canada with more than 1.2 million people liking it at the time of writing. It is stories such as this one; photos such as TAs and a technology that allow us to share, that build the essence of Canada's beloved brand. It is about more than coffee - and also about a "religious experience" to some.
Follow the story of Velma, Tim's vanilla dip doughnut, and her and TAs extreme adventures on Tim's Facebook album.
Posted by @Digital_Daisy at 8:24 PM

Okay. I will admit it. I tried to take a donut to the summit of Elbrus and failed miserably. It wasn’t just any donut. It was a Tim Hortons’ Vanilla Dip. Some people question my fondness for this colourful, sprinkle-covered, childish donut, but I answer them by explaining that eating a Vanilla Dip is a religious experience for me. First off, I must always have a Vanilla Dip with a cup of tea. Balance. It's about balance. Yin. Yang. Sweet. Bitter. I can't have one without the other. Then, there are the multicoloured sprinkles on top. Colour cacophony. Crunch. Playful. Combined with soft, fluffy fresh-fried dough. Balance. Yin. Yang. My teeth pass by the crunchy sprinkles into the soft rush of sweet icing. I wash it down with bitter swig of tea. In a matter of milliseconds, a universe of sensations combined with a rush of insulin and serotonin. With a bite, I connect with my inner child and the whole world looks brighter. Who could ask for anything more?

TA, then we still wonder why marketers say Tims is Canada's most beloved brand!