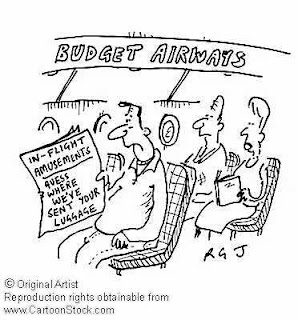 Here is a service that will change the world! "For the better?" you ask.
"Not sure there is definite answer," I reply.

The weary executive assistant counting on the valuable in-flight break to catch up on the office filing and administration will not catch the break once in-flight internet is available.

On the positive side, the internet will be available to start tracking your missing luggage even before you land!

Whichever side of the coin you're on, this will bring about an impact almost as big as the invention of flight itself.

In an article in today, New York Times reports as follows:
Starting next week and over the next few months, several United States airlines will test Internet service on their planes.
On Tuesday, JetBlue Airways will begin offering a free e-mail and instant messaging service on one of its planes, while American Airlines, Virgin America and Alaska Airlines plan to offer broader Web access in coming months, probably at a cost around $10 a flight.
“I think 2008 is the year when we will finally start to see in-flight Internet access become available,” said Henry Harteveldt, an analyst with Forrester Research, “but I suspect the rollout domestically will take place in a very measured way.” “In a few years time,” he added, “if you get on a flight that doesn’t have Internet access, it will be like walking into a hotel room that doesn’t have TV.”
The airlines’ goal is to turn their planes into the equivalent of wireless hot spots once they reach cruising altitude. These services will not be available on takeoff or landing.
If you want to know when you can start tracking your lost luggage in flight, read the rest of this article...